Samsung’s Range of Products for 2011 Revealed

The Samsung Summit 2011 was held over 3 days this week at the Marina Bay Sands exhibition centre in Singapore.

As a tech reviewer the conference was pretty much gadget nirvana.  I had the chance to preview the product lineup from a company that, according to the Financial Times, is the worlds largest electronics company by sales.

Unlike some of their niche competitors Samsung actually have a broad offering, developing stylish technology products across the range, from digital cameras to air conditioning units, from smartphones to 3D televisions.

So, what were the highlights?

Firstly, my favourite item by far was the new Samsung Galaxy S II  smartphone.  While the original Galaxy S gave the Apple iPhone a run for it’s money, I believe this phone jumps ahead of the pack.  It is stylish, functional and powerful whilst also being unbelievably light.

It is beautifully thin at only 8.49mm.  As the blurb goes, it’s “dual-core application processor delivers  fast web browsing, multi-tasking comparable to a PC-like environment, excellent graphics quality and  a responsive 3D user interface on its large screen.”

The Galaxy S II uses Android™ 2.3 Gingerbread and comes equipped with Samsung’s new crystal-clear Super AMOLED Plus screen, an advanced mobile visual display that does not compromise battery performance. The reduction in power consumption from using the Super AMOLED display means it is also more energy-efficient than other comparably-sized devices, allowing Samsung to minimise device weight.

Next, the “Big Announcement” itself related to the all new Samsung Galaxay Tab 10.1

The GALAXY Tab 10.1 is one of the lightest and slimmest media devices on the market with a 10.9 millimetre thickness and a weight of 599 grams.

It has been Designed to deliver an amazing mobile entertainment experience, and certainly my brief hands on of the gadget on the exhibition floor was a positive experience.

The  GALAXY Tab is a powerful Dual-Core Android 3.0 smart media, tablet device. It has a large 10.1-inch screen and dual surround-sound speakers, allowing users to enjoy multimedia functions without having to compromise mobility. It sports both an 8 megapixel AF rear-facing and 2 megapixel front-facing cameras enable users to capture video with full HD recording capabilities.

With an Android browser and the ability to play Flash the Tab 10.1 allows gives an efficient user experience for internet content on the go.

Features include a 1GHz Dual Core processor, the inclusion of super-fast HSPA+ up to 21Mbps, Bluetooth 2.1+EDR and Wi-Fi 802.11 a/b/g/n. More detail can be seen in the table below.

Carrier detail for NZ have not been released yet.  We also hear that the design (while seemingly perfect at the show in Singapore) is due to be tweaked before the full worldwide release in the coming months.

hat else can we expect in 2011, well, the following gadgets also caught my eye:.

Smart TV – a ranges of internet apps that will appear on most Samsung TV’s over 40″; a pico projector that can fit in the palm of your hand and finally the new BD-D8900, a Blu-Ray player which has been nicknamed the mighty box thanks to it’s feature set of 3D Blu-ray with built-in hard disk drive, twin Freeview|HD tuners and PVR with 1TB of memory. 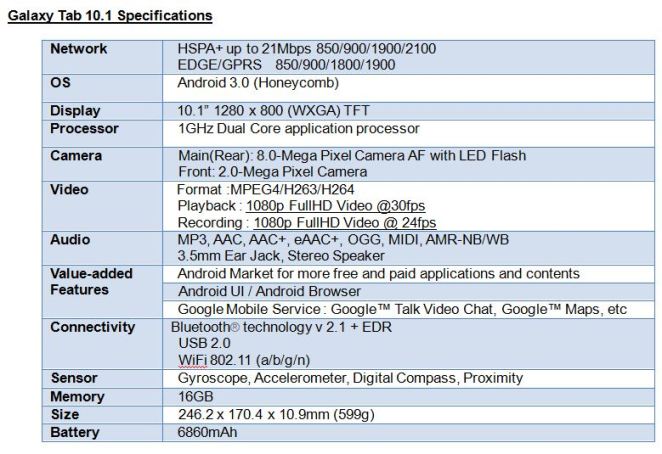 Note for readers: I attended the summit as a guest of Samsung New Zealand.