Are you ready to “see and touch” the iPad 3 this week?

Hey everybody, it’s iPad 3 week. Or at least that’s what the legions of Apple fans worldwide are stongly hoping for.

This Wednesday morning (Thursday a.m. New Zealand time) the world’s tech media will be focusing on the stage at the Yerba Buena Arts Centre Theatre in San Francisco to see what Apple has in store for it’s touch screen tablet.

This is after all the very same venue where the first iPad was unveiled to the world in January 2010, and where, just a year ago, the late Steve Jobs launched the iPad 2. 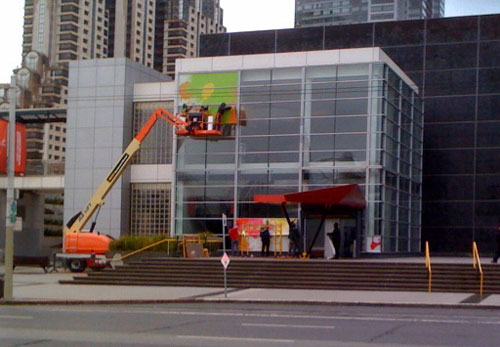 Photo Credit: Slashgear image of the Yerba Buena Center being prepared for the iPad launch in 2010.

I for one have my fingers crossed for this announcement.  When the first iPad came out I struggled to see what all the fuss was about.  This was in the days were the majority of apps for the nascent device were actually upscaled iphone apps – and they didn’t exactly look great. But by the time the iPad 2 came out, I started to get it.  The device which I thought “was not a productivity device” is now an essential part of my work kit. The sheer range of high quality apps, which on the whole work perfectly with the hardware, make the iPad a must have device for a number of different demographics and professions.

So, I’m interested to see what we’ll get on the 7th of March.

Despite my better instincts I have been reading the predictions from “credible sources” which have been gathering a head of steam on the internet.

Here, in no particular order the most-repeated predictions regarding Wednesday’s announcement:

And while we’re at it let’s throw in a couple of “just for fun” predictions.

I will be heading up to San Fran for the announcement, witnessing all of the hoopla first hand for the first time ever. And if the WiFi gods allow. we hope to manage a live Skype call back to Breakfast. If Apple news is your bag you should tune in from 8.15am Thursday to see what we get.

Breakfast’s Gadget Guy John Buckley is one of the select few media who have been invited to the event to “see and touch” the new product.

It is expected that Tim Cook, the CEO of Apple will present the device (last year Steve Jobs made a famous appearance to launch the iPad 2).

The event will start at 10am San Fran time (7am NZ time) and is expected to run for about an hour.