Travelling to California for the Apple Event

Update:  As we got to customs the entire United States immigration computer system crashed. This meant we had to stand in a queue and look at angry and dishevelled travellers for one and three quarter hours.  Let this not be an omen about American technology.  Anyway, back to the story….

Two Tuesday’s in one day.

Well, the first leg went well. I managed to check in to Air New Zealand quite early. Which is just as well because it turns out, I don’t have a visa for the US. The Air New Zealand desk lady ejoyed telling me that a little too much, allowing me to visualise the walk of shame out of the airport, before saying “but you can buy one here”. Phew.

I was put into the capable hands of Christine who entertained and amused through the painful $70 process of requesting a visa waiver online. So, people who are less dumb than me know this, but if you are a foreigner travelling to the states you have to buy a visa waiver online for $40 US. If you get Air NZ to do it for you it’s another $30NZ on top.

Made it to my seat in Business Premier. It’s pretty, pretty good. You are right up against the other passengers but a sense of privacy is maintained by the walls of your pod. The tv screen is adequate and the movie selection excellent (The Artist really is lovely isn’t it)? 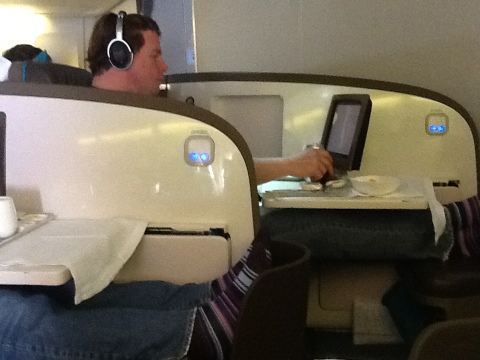 The best part of course is the techno seat which converts into a lie flat bed at the touch of a button. I’ve only flown Business long haul once before, that was with Cathay to Hong Kong. While I agree with comments that Cathay’s better in terms of overall quality, Air NZ’s bed is better. And that counts for a lot if you only have a short time in the city you’re visiting snd want to arrive fresh as a daisy.

Anyway, my overnight thoughts on the iPad 3. I wonder whether the enhancements will be outside of the device. Some new service which only the 3 can manage (like a Siri on the iphone 4S) or an accessory like the smart cover. Given the iPads extensive use in the real world, what layer can Apple add to boost its utility?

Well, all will be revealed shortly as they say.