What’s Hot in the Kitchen? Creative Kitchen Gadgets for 2015

The microwave oven, the kitchen whiz, the rice cooker – if there’s one room in the house that’s had its unfair share of gadgets, it’s the kitchen.In fact there’s hardly an ingredient that can’t be sliced, diced, shredded or blended by new technology.

Today we looked at four gadgets to try and decide what’s hot and what’s not:

The world famous Nutribullet – called the “conversational mainstay of fitness bores” by the Guardian and Britain’s best-selling Christmas gadget by the Telegraph –  is now available in retail stores in New Zealand. 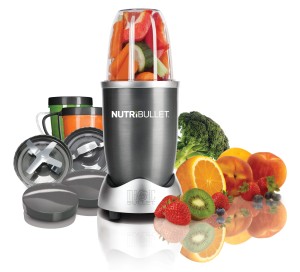 But having tried the NutriBullet, I’m a convert. I used to get laughed at by friends and family because I would try and blend carrots using a stick blender for my shakes, but that’s the whole point of these machines, you can leave the skins on your fruits and vegetables and it will shred everything into a smooth texture which can be absorbed.

It reduces whole fruits and vegetables into a silky smooth texture, and unlike a juicer – it doesn’t remove any of the fibre. Try kale, raw nuts, seeds or even broccoli, carrot and beetroot in your morning smoothie!

It is now available in stores such as Noel Leeming, Briscoes, Farmers and Mitre 10, from $179.99.

I was alerted to this gadget by the lovely people at the Studio of Tableware in Mount Eden.

What is a Zoodler? It’s an Italian designed $120 kitchen gadget that can transform boring vegetables into beautiful strands in seconds with only the tiniest amount of elbow grease.

Studio of Tableware has a shipment coming in from Italy and 70% of the shipment has been pre-sold to interested customers.

You can see the Zoodler in action here:

This is the updated version of the original Paderno World Cuisine Spiral Vegetable Slicer, created about 20 years ago. It offers the same recognized performance, with major added features and benefits. Now included is a fourth blade that will make endless delicate angel hair strands, and a metal pin that is used in conjunction with the straight blade to make spectacular accordion-style vegetables in mere seconds.

Finally – we looked at two fun little kitchen gadgets, the locking tongs and the egg topper for boiled eggs.

The Rosle Locking Tongs may cost $104 but they have a stylish design and the ultimate in functionality.Once you’ve used these tongs you wouldn’t want to be without them in the kitchen and at the dining table (plus your guests will be impressed by the stylish look and the closing with one hand).  They have a patented coupling mechanism that lock and release with the flexing of one hand!

The Rosle Egg Cracker, $52, is a cute little gadget that helps you take the top off of a boiled egg. May not suit everyone but if you are a stickler for a perfectly clean, topped boiled egg, this is the gadget for you.